The Graon mo Jastis Pati led by the young Vanuatu politician, Ralph Regenvanu has announced its support for the Vanua’aku Pati’s candidate, Kenneth Natapei in the Port-Vila by-election scheduled for October 2015. 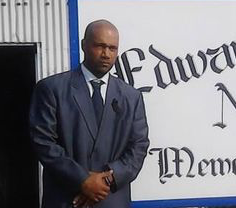 During the meeting, Natapei told them that his vision is to be a voice for the youth in the Parliament.

According to Ralph Regenvanu, Kenneth Natapei’s vision coincides perfectly with the GJP philosophy.

Whilst Natapei is a member of the Vanua’aku Pati, the GJP executive promised it will not field a candidate at next month’s by-election in the Port-Vila constituency.

Regenvanu is also calling upon all the GJP supporters to vote for Kenneth Natapei at the up-coming by-election in Port-Vila.

He concluded that the decision taken by the  GJP executive was made in accordance with the working arrangements which were made in 2012 between the two political formations.

They agreed to work together during the 10th legislature .