Director General for the Vanuatu Ministry of Agriculture, Fisheries, Livestock & Bio-security, Howard Aru says representatives of the Pacific region invited to participate at the first Caribbean-Pacific Agrifood Forum this week in Bridgetown, Barbados in the Caribbean are here to link, to learn in order to be able to go back and help develop their region. 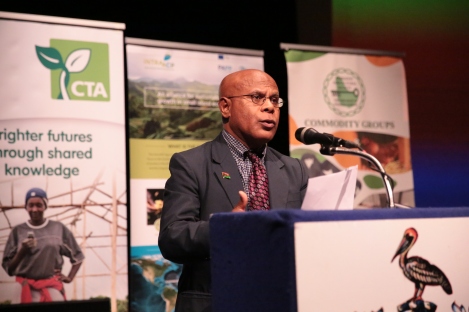 Vanuatu DG for Agriculture, Howard Aru speaking at the opening of the first Caribbean Pacific Agrifood Forum, in Barbados.

“Why should we be here at all given the over 30 hours of travel time around the world from far away in the Pacific region? The simple and straightforward answer to these questions is that we are eager to link, learn and to help transform the Pacific region as is the subtheme of this week’s program here in Bridgetown, Barbados”, Mr. Aru said yesterday morning on behalf of the Pacific region at the opening ceremony at the University of the West Indies in Bridgetown.

He emphasized that the Agri-Tourism conference held in Nadi, Fiji from 29 June to 3 July this year served as a major catalyst for a new beginning and changes in the Pacific, more so for us in Vanuatu.

Aru said that prior to that he and the former minister for Agriculture attended the 2014 Caribbean Week of Agriculture (CWA) in Suriname, here in the Caribbean and pointed out that it was a major eye-opener for Vanuatu.

Aru added that after attending that Caribbean week of Agriculture Vanuatu has taken a lot of initiatives in order to bring positive changes and innovation within the primary sector.

“Vanuatu has already embarking on groundwork preparations toward establishing an Agri-Tourism strategy with support from regional and international donor partners. The Ministry of Agriculture has also opened up an ICT Unit, engaged an ICT officer and is working on an e-Agriculture Strategy to help push ‘ICT for Agriculture’ in Vanuatu. I again thank the CTA here for standing by our side to move this plan forward”, Aru stated.

He also announced that in 2016 Vanuatu will be hosting a National Agri-Tourism Week 2016 and that it will be possibly combined with an Agri-Hack side event to further push  agri-tourism interests in the Vanuatu.

Aru also mentioned that in 2017, Vanuatu will be hosting the first ever Pacific Week of Agriculture.

“It will be a very important event which is very likely to combine for the first time two separately-run annual FAO/SPC funded meetings. I very much want the Caribbean to know that the knowledge and experiences you have and continue to share with us does have a direct bearing and positive impact on the Pacific”, Aru said.

He acknowledged the CTA for facilitating that crucial linkage and making it work for the two regions.

Mr Aru also raised the issue of most of the Pacific island countries who have rich soils but who are still depending in imported vegetables.

“The fact that we stand on very organic soils and keep depending on and begging for vegetables grown on foreign soils ought to make us worry in the long run. Some tell us we cannot do it because that’s the way they want things to be – for us to continue to depend on them”, Aru stressed.

He added that one of the biggest challenges is the need to remain committed and solidly focused on the big picture and to be very strategic and systematic about addressing ‘Agri-Tourism’ in the Pacific and in the Caribbean region.

Howard Aru concluded by saying that  agri-food and agri-tourism are a major ‘game changer’ for the agricultural and tourism landscape in the Pacific and in the Caribbean into the future and that the  two ACP regions must work harder and smarter to realise this vision.

3 responses to ““We’re in the Caribbean-Pacific Agrifood Forum to link, learn & develop our region”: Aru”